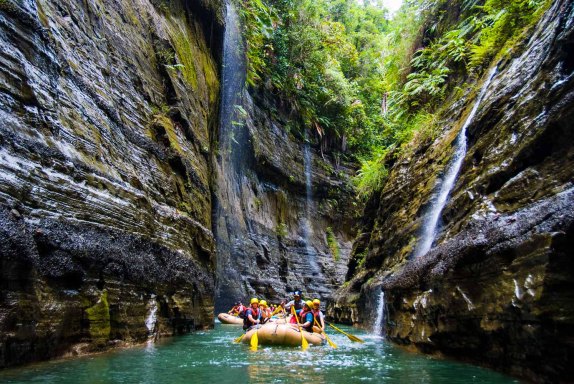 I should have been fighting off the residue of sleep with it being only 6am, but instead I was wide awake. The Rivers Fiji office hummed with excitement as people pulled on their waterproofs and slurped up coffee. I boarded a bus with our fellow rafters and whizzed through the countryside and up mountainous trails. It was a very bumpy journey, but the route allowed us to see some jaw dropping views across the sub tropical rainforest and out to sea. Half way up the mountain, our guide, Moses, bundled us out of the bus offering a banana bread and juice break – and a great group photo opportunity.

Up and up the bus climbed until it finally stopped at a place where we could pick up our helmets, life jackets and oars. We then began an uphill trek through the forest to the start of the Upper Navau river, a protected river calved into the highlands of Viti Levu.

After a safety briefing, we jumped in our raft and met our rafting guide, Joape Kunadei, who told us to call him ‘Jo’. Wide eyed and wobbly, we listened as Jo taught us how to commandeer on the raft; ‘HIGH FIVE!’ he shouted, we rose our oars into the air and as soon as they clattered against each other, we were off!

The water carried us away. Although we visited the river in low season, when the water is supposedly “mellow”, we still sped down the rapids at quite a speed. As we eased our way through the dazzlingly clear waters, Jo made sure we were aware of the river’s history. We passed a waterfall and Jo told told us that once two chiefs had fought on the edge of it, after one had tried to steal the other’s wife, even though he was already married himself. They both fell to their death. ‘That taught us to only have one wife!’ Jo said, as we paddled on past.

As part of Rivers Fiji one day rafting package, we were offered lunch by the waterside. Delicious and varied ingredients from peanut butter to beef for a ‘make your own Fijian sandwich’ were displayed on a table. After a couple of hours of rafting, a sandwich had never tasted better! Then after the short lunch break, we were off again.

We journeyed downstream through forgotten canyons surrounded by breathtaking beauty. Trees of all species stood, primordial and majestic on the riverbank. Fish swam by – one was even caught by a rafter.

All the falls down the canyons are fresh water falls, and we were told to drink from them. ‘This is real Fiji water,’ Jo told us, as we paddled underneath one. We stopped at one of the largest and loudest falls and walked under it on a canyon ledge. As the freezing water thrashed down on us, we screamed ‘Bulaaa!’ at the guides taking photos from below. ‘Do you want to swim in the river?’ Jo asked smiling, once we were out of the fall. And so, already soaking from head toe, we thought, why not?

Rivers Fiji maintains a sense of community; a trait that seems to run deep inside the Fijian people. Each boat raced against the other, there were water fights and “go team!” echoed around the canyons.  We passed neighbouring villages where locals were catching fish and proudly showing us their achievements. Women washed their pots and clothes.

‘The river looks after those who look after it,’ Jo said. From the respect we witnessed it being giving, you could see how much it meant to these people. The river was not only a source to indulge our adventurous side, it was a source to maintain people’s lives.

Exhausted, drenched through, and fully enriched with an enthralling experience we returned back to the Rivers Fiji Office. There we bumped into Kim Anderson, the manager of Rivers Fiji, who asked us how we found our trip. We couldn’t commend the beauty of the river enough.

“You know, the funny thing is, the people that are most surprised about how beautiful the Upper Navua River is are local Fijians!”

With the Rivers Fiji bus, being the only form of transport to the only as high as on the mountain, few ever experience the River as we did. With new friends made, new skills learnt and memory cards full with memorable photos, we returned home for a long hot shower.